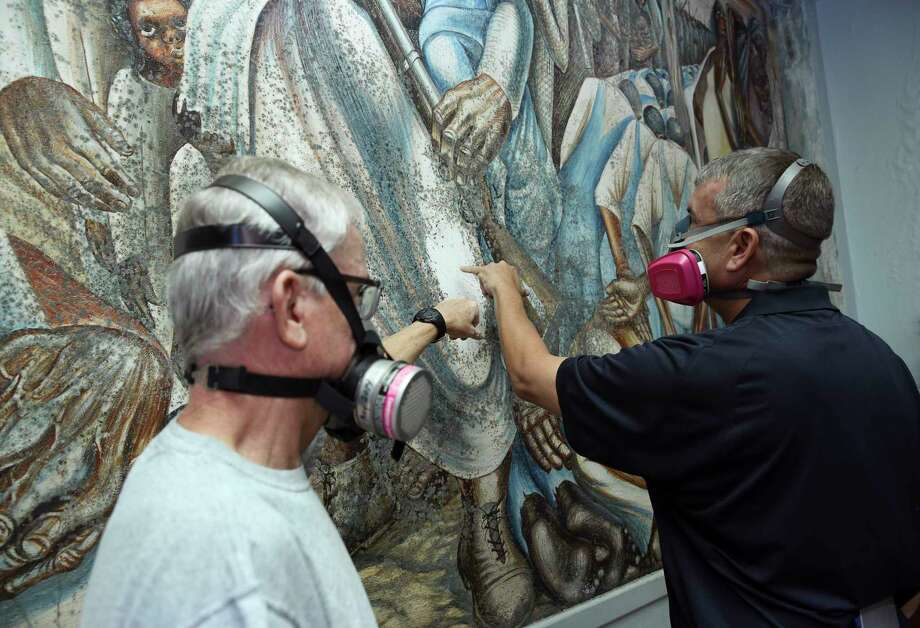 National heritage responders – experts activated when art has been compromised by disasters – showed up Saturday to evaluate the damage on the painting that covers a wall inside the Blue Triangle Multi-Cultural Association’s headquarters in Houston’s Third Ward. The work featuring Harriet Tubman, Sojourner Truth and Phillis Wheatley was painted when the building housed the Blue Triangle YWCA.

For years, a leaky roof threatened the mural.

What was an emergency will become a catastrophe without immediate intervention.

Saving the Biggers mural will require a multi-pronged approach: A construction solution for the damaged building, which includes the roof; an art restoration fix for mold on the mural; and a hefty financial infusion to support those projects.

Caretakers went public in January 2016 to plead for contributions to repair the roof – $50,000 for a patch job and $200,000 for a complete restoration. The funding never came. Now, the resolution will cost much more.

Two weeks ago, Harvey’s unrelenting rain sent water through the roof and walls of the historic building at 3005 McGowen St.

What were warped, discolored ceiling tiles have come down or are inundated with mold. Walls are damp with telltale trickle trails. There are dozens of receptacles throughout the building still catching water.

In a room off the main hallway, the Biggers mural is scarred but stable.

“I am absolutely astonished at the damage that has been done,” said Charlotte Kelly Bryant, the association’s founding president. She noted that the mural has been “perfectly kept” for more than six decades, including the association’s 17 years of owning the building.

Members of an emergency response team from the American Institute for Conservation of Historic and Artistic Works have come to Houston to assess the mural, as well as the flooded collection of props at the Alley Theatre in downtown’s Theater District. Art conservators and a property damage restoration expert wore respirator masks inside the Blue Triangle building.

The mural can be saved. The preliminary diagnosis credits Biggers’ use of two coats of white paint to prime the wall, which protected the colors from moisture.

“I am happy to say that, from a structural point of view, the mural looks OK. The paint is all right, and it’s not flaking, which would have been a much bigger problem,” said Elizabeth Mehlin, a painting conservator from the Boston area who came as part of the emergency response team. “I believe that the mural is salvageable, and now we just need the funding to go ahead and get the building squared away and the humidity levels reduced so that the mural won’t be in jeopardy in the future – once we get the immediate mold issue resolved.”

The mural restoration plan will involve conservation scientists sampling the mold, examining the fungus under a microscope, then applying the same solutions that would repair a similarly injured Picasso or Rembrandt.

Also on site Saturday was Steve Pine, a senior decorative arts conservator at the Museum of Fine Arts, Houston, who works with the Texas Cultural Emergency Response Alliance. National heritage responders traveled to New Orleans in 2005 after Hurricane Katrina. They also provided services following the 2010 Haiti earthquake and on the East Coast in the aftermath of Hurricane Sandy in 2012, Pine said.

The Blue Triangle building, a state historic landmark registered with the Texas Historical Commission, includes a gymnasium, commercial kitchen, meeting rooms and indoor pool. Association supporters are working to preserve the community center, its programs and the mural.

“I ask the prayers of everybody as we beg for assistance,” Bryant said.

Biggers, who founded the art department at Texas Southern University, died in 2001 at 76. His is considered one of the foremost artists whose work captured the black experience of the 20th century. Biggers also mentored several generations of Houston artists, particularly muralists.